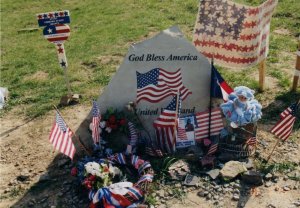 It’s the seventh anniversary of 911. Like most Americans, I am reminded of that dreadful day when planes filled with fuel crashed into the Twin Towers in New York City, the Pentagon, and that farmer’s field in south western Pennsylvania.

On this day I am taken back to my job at Messiah College when my mother called and told me planes crashed into the Twin Towers. With college administrators, faculty, staff, and students we watched the horrible event first hand on television. We were all, as most Americans were, motionless, shocked, and in total disbelief as to what were happening in our beautiful country. This was not a foreign event we were watching, no, this was happening to us in what we believed only happened in other countries.

After watching and listening to horrible news unfolding on television I returned to my office. I turned on the radio. The media was as much in shock as those of us watching the news. There were many reports of missing planes and other national landmarks being attacked. Then came the news of one plane in particular that left Newark, New Jersey en route to San Francisco, California, was under suspicion.

The FAA ordered all planes grounded and no foreign planes were allowed to enter the United States, detouring to Canada, but Flight 93 remained in the air refusing to land. It got as far as Pittsburgh before it made a uturn and headed towards Washington, D.C.

At first the media reported it was heading towards Philadelphia, where many of our freedom symbols such as the Liberty Bell & the Hall of Independence. It was later learned the plane was heading to Washington, D.C. and the possible target the White House.

The crew & passengers on board Flight 93 took matters into their own hands and took the hijackers on. Knowing they were risking their own lives they knew they had to take the plane down.

The plane crashed in rural Pennsylvania, outside the small town of Shanksville in Somerset County. That crash brought the reality of September 11 all the more home to me. One year later I visited the site where Flight 93 went down. There were many visitors there that October Day.
American pride was visible in the many flags, pins, letters, and drawings. I truly felt I was on sacred ground. 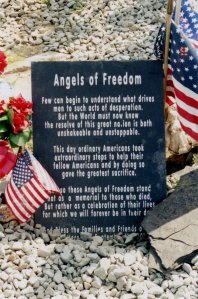 The plaque reads: Few can begin to understand what drives men to such acts of desperation. But the World must now know the resolve of this great nation is both unshakeable and unstoppable. This ordinary Americans took extraordinary steps to help their fellow Americans and by doing so gave the greatest sacrifice. And so these Angels of Freedom stand not as a memorial to those who died, But rather as a celebration of their lives for which we will be forever in their debt. God Bless the Families and Friends of the True Heroes of September 11, 2001. (author unknown)

You can find more photos on my Picasa site.

Here are some links to learn more about Flight 93
Link to feed
TechnoratiBot/8.1