The object of a New Year is not that we should have a new year. It is that we should have a new soul.
G. K. Chesterton
It’s the last day of 2011. Tomorrow the world begins a new year. As inhabitants of this earth, we have witnessed many world events together – the fall of Egypt and Libya, the great tsunami that hit Japan, the pulling out of United States troops from Iraq, a royal wedding, and the rage of Mother Nature throughout the United States.
Then there is my own personal events that occurred during 2011 – events that challenged my faith in people and rocked my own confidence. I had to watch my mother as her memory faded and as a family come to the realization that her needs were more than the we alone could handle, so the decision was made to place her in a care facility where she would be cared for 24/7.
In July, I was laid off from a job I held for 5 years. That was devastating to me, but through the loss, I have grown personally.
In October, my oldest grandchild turned 13 – a milestone. Once a small premature baby girl has grown into a beautiful young lady who I am so proud of.
On November 19, my son and his family were dealt a terrible blow when Amy’s father died unexpectedly. Jim’s loss affected many people, but none so overwhelmingly as Matthew, Amy, Rhianna, Gabriel, Emily, and his wife Carol.
Jim left a beautiful legacy to his family and especially his three grandchildren, whom Dan and I share with him. Dan and I feel honored to have known a man like Jim who was selfless and cared deeply for the people around him. He especially cared and loved his grandchildren. He would give them surprises constantly just to see the joy in their eyes. Jim is deeply missed and will be for years to come.
The events I mentioned here along with so many other events that occurred throughout 2011 has caused me to do a lot of pondering about my life and what I can do to make 2012 better. I relearned the importance of compassion, patience and to live each day consciously.
I am facing 2012 unemployed but with a renewed faith and confidence that I will be able to find a profession where I can use my knowledge and my talents as a researcher and as a writer.
Happy New Year to all my family and friends, may your year be blessed with lots of happiness. 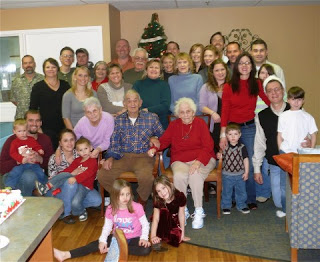 This website is for informational purposes only and copyright infringement is not intended. Photos on this site belong to the blog owner and cannot be copied, saved, or used without first notifying the blog owner. Photos not belonging to the blog owner will be credited to the proper owner.
©2015-2021 Christine Clepper Musser