In January of this year, Dan and I flew to Las Vegas to attend the wedding of our friend, Brenda Miller. It was the first time either of us was in Vegas and what a wonderful experience. We ventured to the West Rim of the Grand Canyon, went to Red Rock Canyon and to Hoover Dam, but the highlight of the trip was truly Brenda and Rick’s wedding.

Dan and I, along with nineteen other guests, waited in the Palace Station lobby for the shuttle to take us to the location of Brenda and Rick’s wedding. The bride and groom kept the details of their wedding a secret, but we all knew we were in for something special because of Brenda’s show business background as a Bette Midler impersonator.

The shuttle took us to The Graceland Wedding Chapel, owned by Brenda’s friend, Brendan Paul, also, an Elvis impersonator. This Chapel has been around since the 1970s and featured in films such as Fear and Loathing in Las Vegas with Johnny Depp and When Fools Rush In with Selma Hayek and Matthew Perry. This was also the location of weddings by several celebrities, such as Jon Bon Jovi, Billy Ray Cyrus, and Aaron Neville.

The New England style Chapel with its white siding trimmed in periwinkle exemplified the event’s elegance. The wedding took place in a small room with golden highlights, pearl colored walls, a large stained-glass window with doves and roses, and cream colored pews. Silk flowers and ribbons in mixed colors of dark goldenrod, buff, and metallic brown were attached to each pew.

Once we were all seated, Rick took his place at the front of the room and then our attention was drawn to the back of the room where the gorgeous Brenda Miller stood in her silk eggshell colored, strapless wedding dress holding a bouquet of purple and white roses accented with purple and pearl beads. She looked so radiant. Brendan walked her down the aisle singing the Elvis ballad, “I Can’t Help Falling in Love” bringing tears to everyone’s eyes.

After the vows were exchanged the guests exited the Chapel. We waited outside for Brenda and Rick to exit and when they did it was like a paparazzi frenzy with cameras flashing simultaneously.

Brenda, being the thoughtful person she is, wanted to make the occasion of her wedding special for everyone, especially the first time Vegas visitors. As I said earlier, Brenda and Rick kept the events of their wedding and reception under wraps. But, before leaving the Graceland Chapel she told us we were going to Bally’s Hotel and Casino. Once there, she led us to the where the show Tony n’ Tina’s Wedding was being performed. Brenda had previously made arrangements with the show’s director to have her wedding reception take place during the show. This was a first in the show’s history.

Tina ‘n Tony’s Wedding is a comedy full of bride and groom shenanigans and an ongoing Italian family feud. The show originated on Broadway and is still performed there today. The show is mostly ad-libbed; very little is scripted. The audience is encouraged to participate in the show and the more audience interaction the better the show. As part of the show the audience enjoyed a dinner buffet of Chicken Parmesan, pasta, brochette, garlic bread and wedding cake.

Brenda had her guests’ tables covered with white table clothes and decorated with white calla lilies, shot glasses engraved with “Game Over” inside bags made of  purple tulle and chocolate covered strawberries arranged on three tier crystal plates topped with Marge and Homer Simpson. 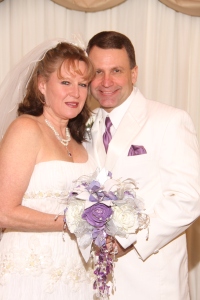 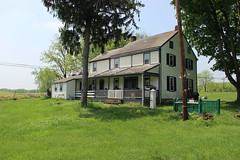