It was around midnight 37 years ago when the phone call came. It was the Chaplin from Fort Bragg, Fayetteville, North Carolina. He asked to speak to my mother or father. My mom took the call. The Chaplin tells her that around 7 p.m. (July 4th) there was a swimming accident and my brother was taken to a hospital in Charlotte, North Carolina where he was unconscious and on a respirator.  Immediately my mom got my dad awake – she did everything she could to get her and my dad to Charlotte as soon as possible so they could be with their son.

My parents finally got a flight to Charlotte on July 5, but by the time they arrived at the hospital it was too late. Jeff had passed on. I answered the phone when my mom called home. She asked for my older brother who was in the barn taking care of the cows. I called out to him through the intercom system. He picked up the phone and I stayed on the line. As my mom told Bud that Jeff had passed away I dropped the phone, screaming out “why God, why”? I believed that God was going to spare Jeff’s life. I believed that Jeff would be okay – after-all, I spent hours in prayer after my parents left for Charlotte – how could God not have spared him. I remember my sister-in-law comforting me as I screamed and wailed. I was devastated.

Just a week before the accident Jeff was home on leave and showing me how to drive stick shift in his fancy little Triumph. Jeff wasn’t always so nice to me, we had our sibling squabbles, but in our later years, when I was a teenager and he was out of school, he became my protector. I forgave him for the mean things he did to me as his little sister – I grew to appreciate him and then he was gone.

Today, as in years past and as I grew older, I have more of an appreciation of the 4th of July. I now understand and appreciate the sacrifices military men and women have made. I do my best to recognize them on our nation’s birthday – it’s difficult though – because, when I think of this day and those who have sacrificed their lives, I can’t help to think of Jeff. He was stationed at Fort Bragg, Home of the Airborne & Special Operations Unit. He was part of the 82nd Airborne – he was on a 30 day leave, preparing to go to Fort Riley, Kansas. He loved jumping out of planes & helicopters – on his arm he had a tattoo saying “God is my reserve” with a parachute – meaning that God would save him if his parachute wouldn’t open and he had to pull his reserve. I miss my brother with all my heart – I wonder what he would be like as a 58 year old man. Would he have children, be a grandfather? So many things I wonder about him if he were alive today. 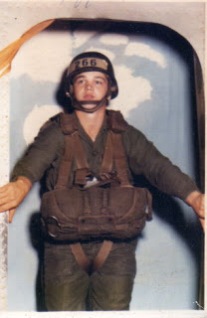